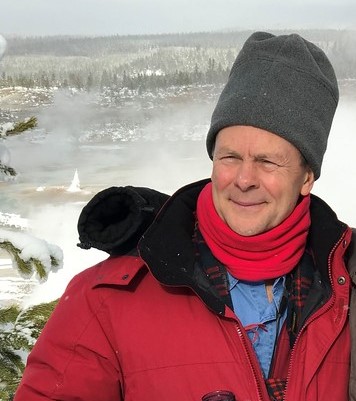 Itching to travel? Take a virtual trip to Yellowstone National Park with Stephen Cushman, Robert C. Taylor Professor of English in the College and Graduate School of Arts & Sciences at the University of Virginia. In January 2019, Cushman led a group of alumni and friends on a search for the elusive wolves of Yellowstone with UVA’s Alumni & Parent Travel. Follow his experience with photos taken on the trip. Lifetime Learning will post more virtual adventures this winter so you can explore from your home and anticipate expeditions of your own!

Look for Cushman in a new Ken Burns documentary, Hemingway, when he shares his expertise on the famous author (PBS, April 5-7).

Check out Alumni & Parent Travel’s upcoming trips to National Parks and other destinations!

Tuesday, January 29, 2019, 6:08 a.m., in Gardiner, Montana. Temperature outside is one lone degree. Still black, star-spangled night, two hours before sunrise, with Venus huge and Jupiter by her side in the eastern sky. Dark bulk of Electric Peak, all 11,000 feet right out the lodge door, not yet visible. Since our group arrived in Jackson, Wyoming, four days ago, the full Wolf Moon has been waning steadily. Nobody reported seeing any wolves anywhere in Yellowstone yesterday, but our guide, Karl Swoboda, has a reputation throughout the dedicated Yellowstone wolf-watching network as particularly determined. Karl boasts a perfect record for locating wolves for groups he leads. He has Captain Ahab’s intensity, except that he loves what he chases. 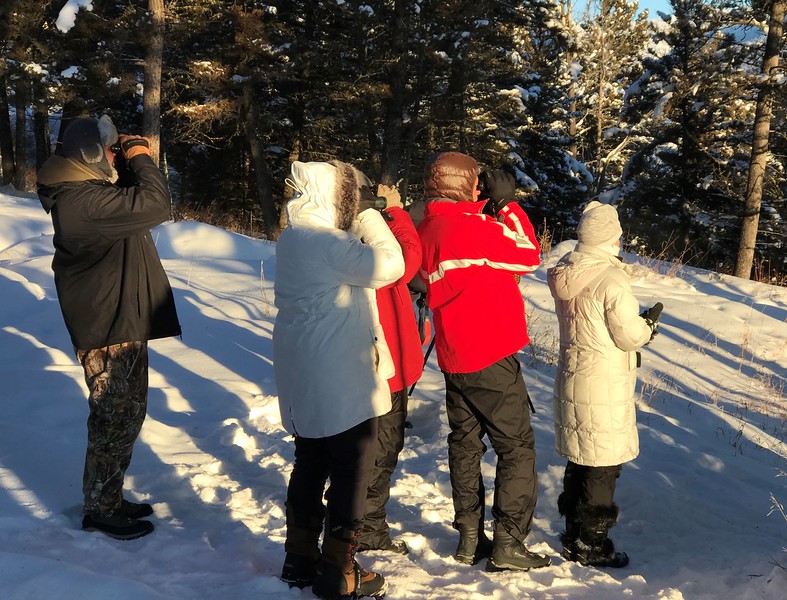 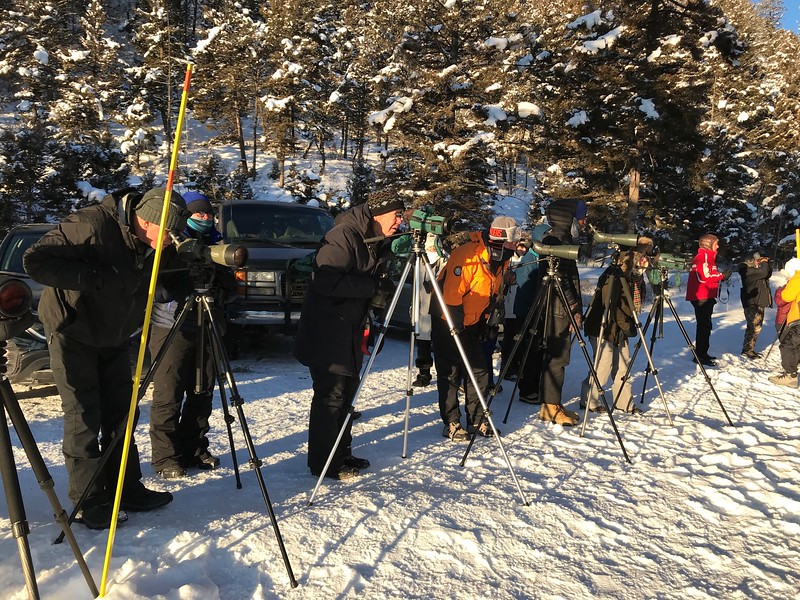 Just before sunrise broke at 7:51 a.m., the thermometer in the Suburban reads -15 on Blacktail Plateau. Five of us are riding with fellow-guide Shauna Baron, following Karl’s van. Karl and Shauna talk by radio, which also connects them to the stalwart chain of wolf-watchers who get up in the cold and dark every day to fan out across the Lamar Valley along the northern park road. Armed with high-powered telescopes, binoculars, walkie-talkies, hand and foot warmers, and lots of hot coffee, they settle in to do the hardest thing, at least for many of us: wait patiently and pay attention. 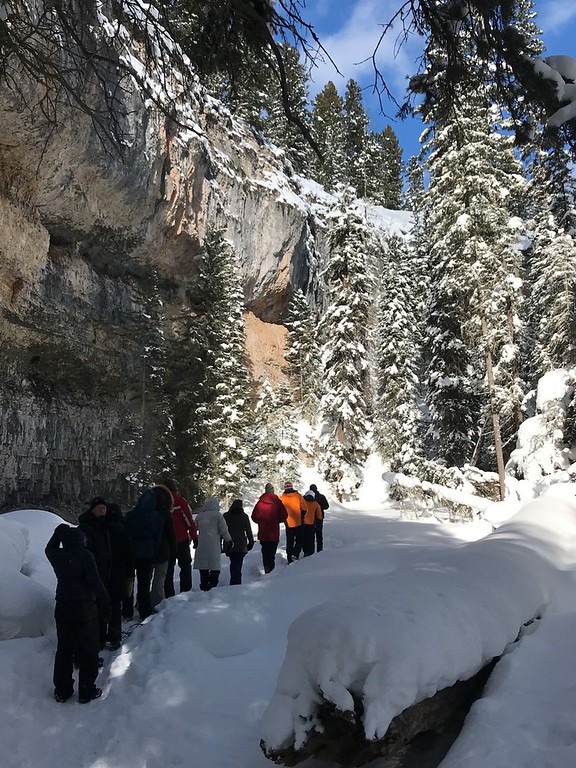 Thanks to Nate Blakeslee’s American Wolf: A True Story of Survival and Obsession in the West (2017), which travelers received ahead of time, we’re familiar with the basics of the Yellowstone wolf-watching community. Until you see it in action, though, you have no real idea how special and sophisticated it is. Blakeslee’s superb book, which reads like a page-turner novel starring an Alpha female wolf named O-Six (no spoiler here), makes us all eager to find one of the famed Yellowstone packs.

But we also agree, as the Suburban glides east over the flashing snowscape, that even if we never see wolves, we’ve already seen plenty. Moose; mule deer; trumpeter swans; elk by the hundreds; bison by the thousands, sometimes crossing the park road and blocking sparse traffic; Bighorn sheep up on the ridges, profiled against piercing clear sky; a mountain goat on a cliff face of Thunderer; golden-eye ducks; an American dipper-bird at Lewis Falls (named for Meriwether); a single coyote hunting in deep snow at the southern entrance of Yellowstone; a red fox crossing the road; golden eagle in silhouette on rocky outcrop; a bald eagle in a dead tree, its face bloody from scavenging; Old Faithful erupting in billows of steam, as four or five of us stand in the dark around the perimeter, alerted by its harbinger rumble; geothermal mudpots, geysers, hot springs, fumarole vents smoking or steaming, with crusts of ice and snow along their warm margins; icy rivers; waterfalls; and all the snow snow snow that will wind up eventually in the Gulf of Mexico.

At least we tell ourselves so. 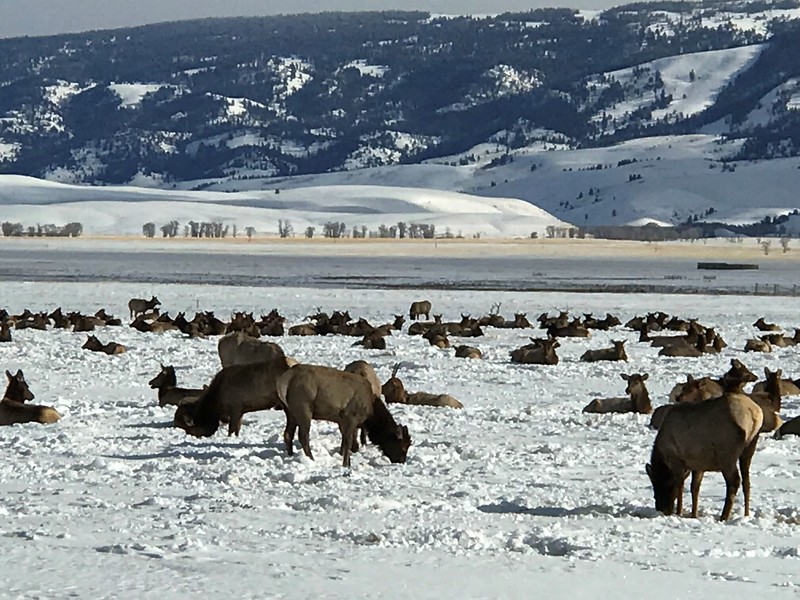 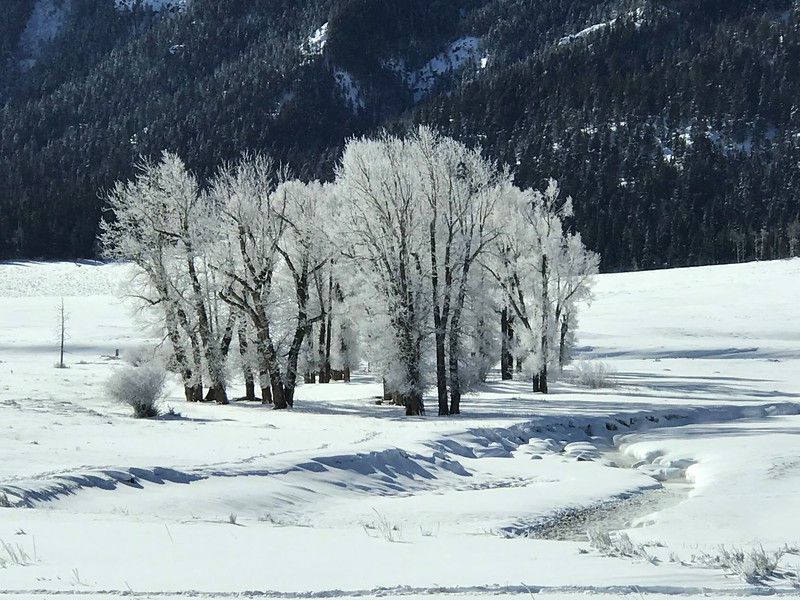 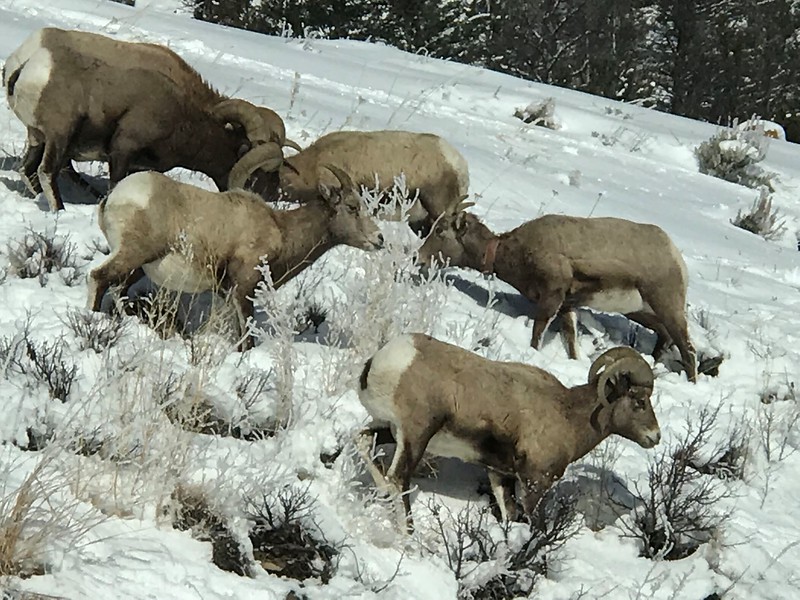 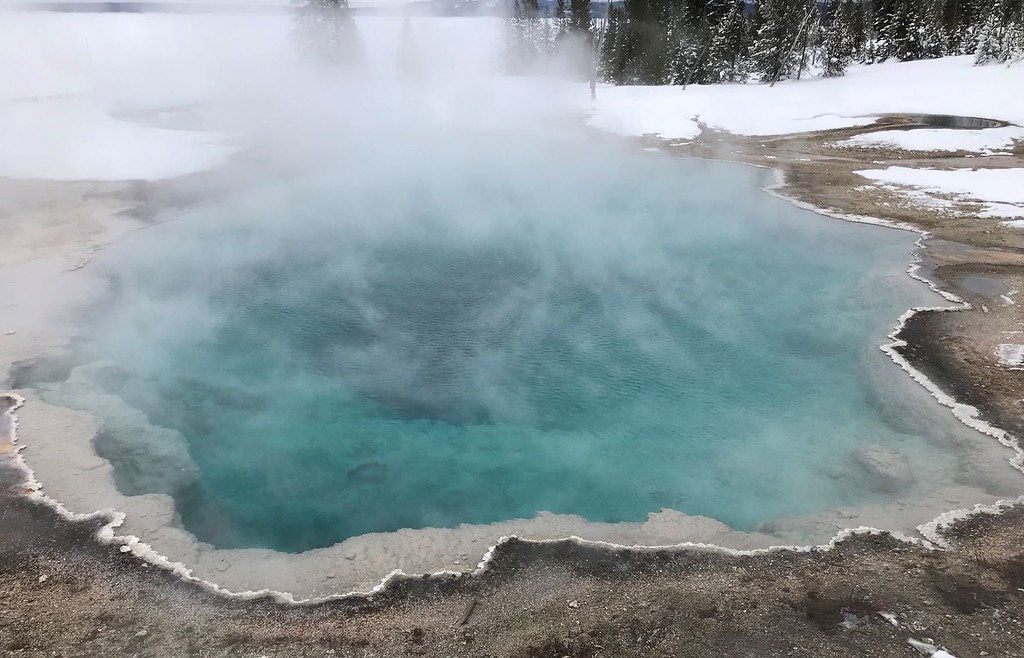 Shauna’s radio crackles at Hell Roaring Creek. A quick U-turn, and we’re parked at Upper Hell Roaring turnout with spotters who have all 11 members of the Junction Butte pack, made up of eight blacks and three grays, moving right to left a little over two miles away. With high-powered scopes, the distance is nothing and the detail acute as they make their single-file progress across the face of a slope on the other side of the valley. They cross a creek and begin to work their way around a bison herd on the downwind side. From smelling bison exhalations, the wolves can tell who in the herd is sick or weak, and these become the targets. At one point, three wolves get close to a bison on the edge of the herd, but others rush in and drive the wolves off. Only then do we notice our breath casts shadows. 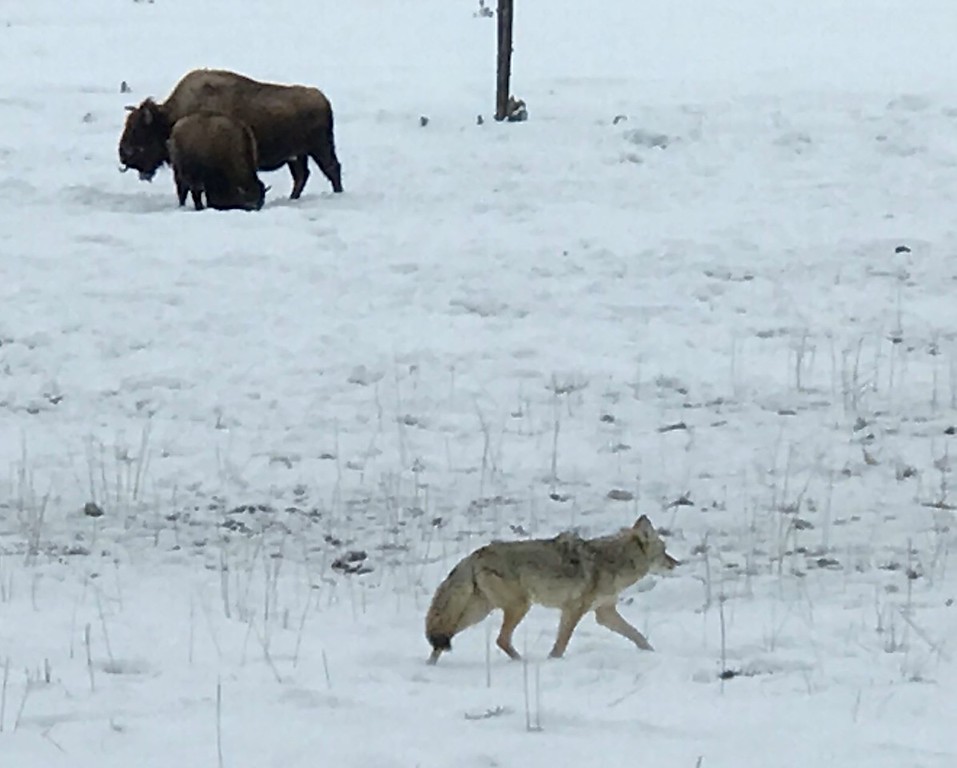 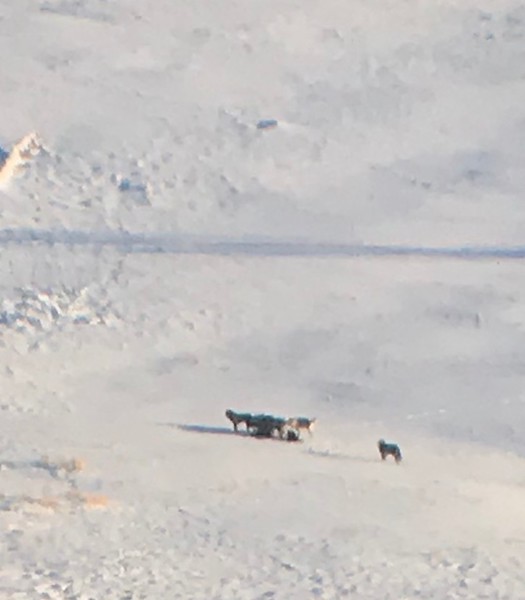 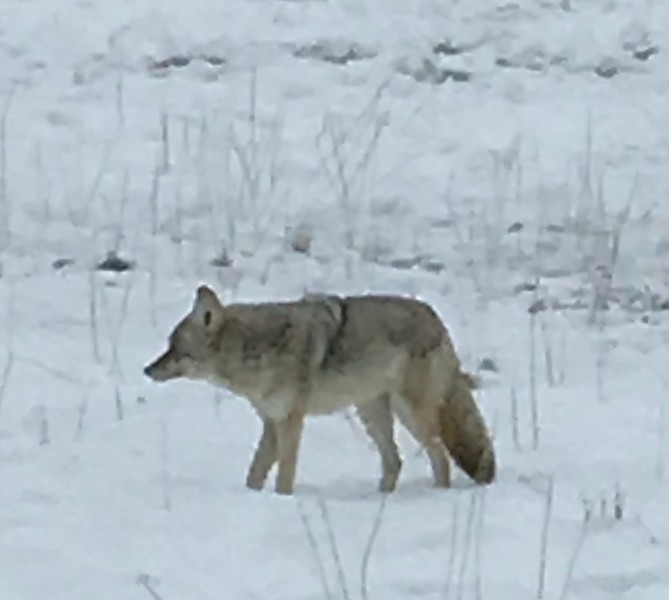