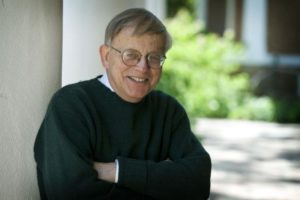 In celebration of the end of the 2021-2022 academic year, we are happy to share a Thoughts From the Lawn blog, previously published in May 2018, written by Alexander G. “Sandy” Gilliam, Professor Emeritus at the University of Virginia.

Final Exercises are just days away, and University History Officer Alexander G. “Sandy” Gilliam, Professor Emeritus at the University of Virginia, shares a historic and personal look at how they have changed in “Evolution of Finals.”

Finals, the traditional name for the Graduation or Commencement Exercises at the University of Virginia, has evolved over the years into something that is almost totally different from what it once was. For one thing, it is a lot shorter than what it was in the really old days – when sometimes it lasted as much as a week. And for another, Finals was later in the year – usually in late June or early July (in 1955, for example, my own graduation, in the more recent old days, was on June 13th). Of course the University now opens a month before it did in the ‘50s.

As for the length of the celebrations, it should be pointed out – again in the really old days – that there wasn’t much in the way of public entertainment in Charlottesville, so people flocked to the Grounds to hear the speeches and debates that went on at Finals. Virginians then had a penchant for oratory, a trait that is now lost except perhaps at election time.

Let me describe, briefly, a few of the celebrations of Finals over the years.

The first is the Finals of 1877, which is recounted in some detail by Dr. David M.R. Culbreth who took a degree that year. Dr. Culbreth was from Delaware, although he practiced medicine in Baltimore for many years after he left the University. He matriculated in 1872 and he wrote a memoir (The University of Virginia; Memories of her Student-Life and Professors) about the University and his time here which was published in 1908 and which is almost encyclopedic. He had a good style and he is fun to read.

The Finals of 1877 began on Sunday evening, June 24th, when the Rev. Dr. John A. Broadus gave the annual Y.M.C.A. (remember that the first college Y.M.C.A . in this country was established at the University) sermon in the Public Hall, the auditorium that was in the ungainly Annex of the Rotunda, built in 1853 and destroyed in the Rotunda Fire of 1895. On Monday night, the Washington Literary Society “Celebration” took place, followed the next evening by the Celebration of the Jefferson Society. There was oratory aplenty at both events and medals awarded to the winners of the speaking competitions. On Wednesday evening there was a joint Celebration of both Societies at which Senator John W. Daniel of Lynchburg, a prominent political figure of the day in Virginia and an excessively long-winded speaker, gave the principal address (he delivered one of the speeches at the Inauguration of President Alderman in 1905, a speech which was considered lengthy even in a day when long speeches were still popular).

Thursday was the Final Day; the ceremony was held in the Public Hall beginning at 10:00 pm and lasting about two hours; diplomas and prizes were awarded. Students did not wear academic regalia – that did not come about until the arrival of President Alderman and the first Finals over which he presided in 1905. And there was no Procession.

But that evening there was the Final Ball, which was held in the almost finished Brooks Museum.

There was to be a crew race in Lynchburg on Saturday; in a forerunner perhaps of the present Beach Week, Culbreth says most people went to it on an excursion train Saturday morning, but he and a number of his friends and their dates and their chaperones – and Senator and Mrs. Daniel – left on Friday in a couple of special cars hitched to a regular train bound for Lynchburg. Unfortunately, the Virginia rowing team performed abysmally.

I own a copy of the program for the Commencement Exercises of 1908, which ran from June 13 to June 17. The first event listed, on the evening of the 13th, was the Class Exercises at 8pm on the North Front of the Rotunda. The Exercises, probably a forerunner of the present Class Day, included the presentation of “V’s” to athletes who had lettered in their sports. The next day, Sunday, there was a service in the Chapel at 11, an organ recital in Cabell Hall at 5, and the Y.M.C.A. address at 8 in the auditorium of Madison Hall (the auditorium was in the rear wing – now divided into offices, with the addition of a second floor). 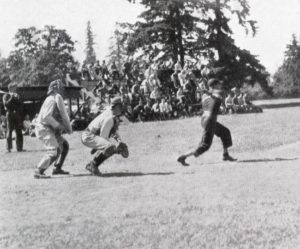 On Monday, the 15th, the Board of Visitors met and there was a baseball game (with an unnamed opponent) at Lambeth Field at 3:00 pm. That night at Madison Hall there were debates, the awarding of literary prizes and an address before the two literary societies by an unidentified speaker. Tuesday morning was given over to a meeting of the alumni – alumni reunions in those days and up until almost modern times, were held at Finals. The meeting was followed by an address by George Wayne Anderson, Class of 1886, of Richmond; prominent alumni speakers were a feature of Finals in this period and their speeches were usually printed and distributed after the fact.

The principal activity on Tuesday, the 16th, was the installation of the University’s chapter of Phi Beta Kappa (the Raven Society, founded in 1904, preceded Phi Bete by four years). That evening there was a dance at the Fayerweather Gymnasium, now, after many alterations to the interior, the home of the Art Department.

Finals that year were a little different for my fraternity brothers and me in that our fraternity, Beta Theta Pi, celebrated its centennial on Friday and Saturday of Finals – which was the part of the weekend given over to reunions. Finals then customarily came in June and the actual Commencement Exercises were held late on Monday afternoon in the futile hope that it would be cool late in the day (the Commencement Exercises were moved to Sunday in the late ‘60d/early ‘70s because the University – and thus the number of graduates – had grown to the point where Charlottesville simply could not cope with the traffic on a business day). 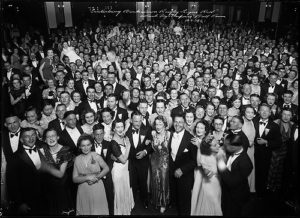 On Saturday night there was a formal – which is to say black tie – dance at Memorial (“Mem”)Gymnasium with a big name band. I cannot remember who played in June, 1955: my date and I did not go because the last big event of the Beta Centennial – a dinner dance at the old Monticello Hotel downtown, took place at the same time. The Finals dance was still going on when the Beta dance ended, so my date and I dropped by Mem Gym. We watched for a while but could not go out on the dance floor because we were not in evening clothes.

On Sunday morning there was a formal Baccalaureate Service in Cabell Hall. It was well attended but I remember the organ recital by Frank Finger, the popular Professor of Psychology, more than the sermon. On Sunday afternoon, following a custom started some years before by President and Mrs. Alderman, President and Mrs. Darden received the graduating students at Carr’s Hill. My recollection is that Mr. and Mrs. Darden stood in the parlor to the left of the front door as you enter the house. I didn’t particularly want to go, but as my parents knew the Dardens, I was overruled.

Late Monday morning we went to the Lawn in front of Cabell Hall for the Class Day exercises, the occasion for the formal awarding of various prizes and honors: I was given the Algernon Sydney Sullivan Award. (It was announced several days earlier by the Cavalier Daily under the headline “Gilliam to Receive A.S.S. Award.”) There were speeches by various Class Officers, but no outside speaker as there is now on Class Day.

At the Commencement Exercises that afternoon, there was a formal academic procession, as there is now, down the Lawn from the Rotunda to the South Lawn. But in those days, the University was much smaller so the graduating class was a fraction of the size of the graduating classes nowadays. We were lined up at the Rotunda by Faculty Marshalls by school, and in alphabetical order in our respective schools, and we marched down the Lawn two by two. Chairs were set up on the South Lawn and everyone – Faculty, graduating students and guests of graduating students – was accommodated in this area without crowding and with room left over, such was the size of the University.

The order of the Exercises was different than nowadays: the conferring of degrees came at the beginning of the ceremony, not after the Address as is the case now. Another difference is that each of us was called by name to come forward to receive our diploma. This was done by school and by alphabetical order within each school – hence the care taken by the Faculty Marshalls when we lined up in front of the Rotunda. As your name was called you walked up on the platform, were handed a rolled up “diploma” (actually, a blank piece of paper; you collected your real diploma later from the Registrar) and then shook hands with the President before going back to your seat.

The Commencement Address followed this; it was given by John Lord O’Brian – I have no recollection of him or his speech.

Nowadays, Final Exams end at least a week before the Commencement Exercises, which has given rise to “Beach Week,” when a good many of the graduating class go off en-masse to the beaches, usually in the Carolinas. In my time, Exams lasted until only a few days before Finals, so what there was of beach going – and there wasn’t much – came after Finals. I was a groomsman in a wedding in Charlottesville a few days after taking my degree and I did indeed go to Virginia Beach for a few days after that, but mainly to attend a big party in Norfolk. Most of us had the beginning of our military service ahead of us that summer, with some classmates having to report for duty only a few weeks after Finals. I was not due to go in the Army until the fall, but I had to get home to the summer job I had lined up to fill the interim before the military .

I came back to the University in 1975 as Assistant to President Hereford. I was not much involved with Finals in 1975, as I had only recently arrived, but I did get involved in 1976 and filling an administrative void, I took over the running of the President’s Office’s involvement with the weekend. As such, I helped the officers of the Graduating Class organize what by then was still called “Baccalaureate,” but bore little resemblance to the Baccalaureate Service of Finals, 1955. The religious service of my time had been abolished some years earlier and the ceremony was entirely secular and in fact was more like the Class Day of 1955.

I began working with the Class Officers on Baccalaureate, mainly helping them find speakers, which had become increasingly difficult for them. After conversations with several potential speakers – people I knew – who turned down the students’ invitations, I concluded that “baccalaureate” was the main problem: speakers were under the impression that they were being invited to preach sermons, which none wanted to do. So at my suggestion, in 1978 we changed the occasion to “Baccalaureate and Class Day.” That stood for one year, but “baccalaureate” continued to worry potential speakers, so the next year, 1979, I devised the awkward, but patently secular, “Class Valedictory Exercises,” commonly shortened to “Valediction.”

Thus, as of this writing, it stands. And invited speakers no longer have to worry about preaching sermons. 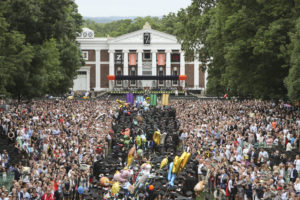