Living in the Anthropocene

In recognition of Earth Day on April 22, Justin McBrien, PhD Candidate, Corcoran Department of History at the University of Virginia, has contributed “Living in the Anthropocene.” Justin was awarded the 2018 Frank Finger Graduate Fellowship for Teaching, awarded annually to a teaching assistant in the College of Arts & Sciences in recognition of stimulating and organized classroom teaching or lab instruction. Justin has written several articles on the history of the Anthropocene and climate change, including a recent piece in The Washington Post.

“Living in the Anthropocene”

It had been a long day at the 2018 UN Climate Accords summit in Charlottesville. After several rounds of proposals, computers models still showed international efforts to keep warming under two degrees Celsius an elusive goal. The major roadblock was the American delegation – skeptical of even the existence of the problem, they refused to make any concessions in terms of cutting greenhouse gas emissions or investment in renewables. The Chinese delegation threatened to scrap any deal entirely if the US did not make any concessions. Rising global powers like India argued it was their right to seek the same standards of living as those in the West. Nations of the Global South demanded redress from those nations who bore the lion’s share of historical pollution while shouldering the least amount of its consequences. The eloquent pleas of climate activists fell on deaf ears while fossil fuel lobbyists whispered into them. It seemed the summit was at a stalemate.

These mock climate accords our class embarked on in the J-Term course, “The Anthropocene: Climate Change and Global History,” showed how hard it is to come to any agreement for international action on climate change. The urgency of the task had only grown over the course of two weeks in our class, as our collaborative effort to construct a projection of how trends in energy, population, and climate would affect changes in global environmental and socioeconomic order up to 2100 CE had shown that mitigation is possible – but the window of time was growing shorter and shorter. 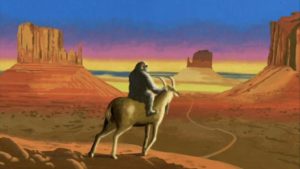 The Anthropocene is the proposed name for a new geological epoch marking the “Age of Humanity,” an idea that the collective impact of human beings has now permanently transformed the face of the earth. Over the past decade, the idea of the Anthropocene has flourished in the sciences and the humanities alike, prompting an important dialogue about how we might understand our contemporary moment and conceive of humanity’s future on a rapidly changing planet.

The Anthropocene is about time. Geological epochs are roughly dated around eons to millions of years. Now we discuss geology in nano-seconds, such as whether it was 1610 or 1945 CE when humanity crossed a threshold to become a planetary geological agent, what geologists refer to as a “golden spike.” Scientists have proposed the rise of agriculture, the Columbian Exchange, the Industrial Revolution, radioactive fallout from nuclear weapons, plastic pollution, and even chicken bones as the culprits. The question is what, tens of thousands of years from now, would scientists looking back see?

The stakes of this debate have real life consequences. Will climate modification initiatives, such as spreading aerosols into the stratosphere to reflect sunlight back to space, help ameliorate or only create even more catastrophic risks? How do we convince those who doubt the effects or existence of the issue entirely? What are the best strategies to communicate threats without devolving into pessimistic resignation? Is the word “Anthropocene” itself the right term to describe our present epoch, or perhaps is it better to name it the “Capitalocene” or “Manthropocene”? Most importantly, what is our generation’s responsibility to life, to the earth, to the future of humanity?

It can be difficult to teach about environmental problems today without either lapsing into catastrophism or downplaying the gravity of our situation. What must be emphasized is that today’s ecological crisis is not the result of “humanity” writ large –only five nations have produced the majority of total historical emissions. This does not even include the hundreds of years of imperialism that led to the vast destruction of peoples and ecologies across the globe. This is why environmental justice must be at the center of any discussion of the Anthropocene.

The Anthropocene is a paradox – it is a geological history of the present whose impact lies mostly in the future. It shows how human agency has come to be one of the most dominant forces on the earth, but also how much the earth always outstrips our power to control it. Grappling with these paradoxes are what the Anthropocene asks of us, and our class’ modest contribution to an answer can be found here.