The Events of August 11th and 12th: A Historian’s Brief Reflections on Charlottesville

Written by Derrick P. Alridge, Professor in the Curry School of Education at the University. His research foci include African American educational history and civil rights.

In the days leading up to August 11 and 12, 2017, when white nationalists and white supremacists converged on Charlottesville, Virginia for the Unite the Right Rally, I was interviewing former civil rights era teachers in my hometown of Rock Hill, South Carolina. From these teachers, I heard firsthand accounts of life growing up in the Jim Crow South. I learned that many became teachers not only to pursue an occupation, but also to challenge notions of black inferiority prevalent in Jim Crow society. These teachers wanted to give back to their communities and liberate the minds of their students, black and white. Their stories have inspired me and helped me to better contextualize what transpired in Charlottesville. 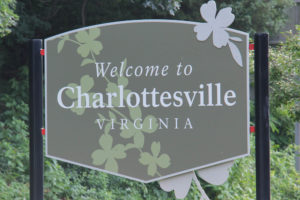 Returning to Charlottesville on Friday, August 11th initially seemed like any normal return home from a research trip. However, by that evening any sense of normality was shattered. Within hours, I felt I had stepped back into the Jim Crow era these teachers had so vividly described. On August 12th, I watched news coverage of white supremacists marching onto the grounds of the University of Virginia. I observed with horror as they carried torches and chanted the phrases, “Blood and soil,” “Jews will not replace us,” and “You will not replace us.” As an African American, I was all too aware that “you” referred to me, along with other African Americans, Latinos, immigrants, and all people of color. I heard reverberations of the virulent history of anti-Semitism in their chant as well, portraying Jews as taking over America and manipulating blacks and other ethnic groups.1

As news of the Charlottesville incident spread I began receiving messages of support and solidarity from friends across the country. The first arrived in a text from College of Charleston historian Jon Hale. “I wish I was at UVA to join the counter protests . . . such appalling scenes coming out of Charlottesville . . . I hope you and your family remain safe.” My response to Jon was that it was a terrible situation and that people around town seemed to be traumatized. Receiving the message from Jon prompted my recognition of the historical significance of this moment. This awareness was further confirmed when University of Georgia archivist Jill Severn posted on my Facebook page, “Hope you are thinking about documenting this. Are you connected with UVA archives people?”

As I watched television and saw the worldwide coverage of the events, it dawned on me that August 11th and 12th in Charlottesville marked an international historical moment as well. My longtime friend, literary scholar Phyllis Jeffers-Coly, who now lives in Senegal, posted, “remembering the vigilance of Ida B. Wells in the face of racist and white supremacist violence in the wake of what is going down in Charlottesville, VA this weekend. And, recognizing our capacity to change the course of the US as we have done over and over and over and over again.” New Jersey judge Leland McGee sent the following message: “I’ve been sitting here watching what’s unfolding and just praying that all is well, I can only imagine what it’s like on grounds. Be well, I hope to talk to you soon.” Another friend, former UGA professor Carl Glickman, posted: “Derrick, you are exactly where you need to be!!” 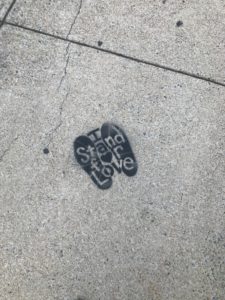 Receiving these messages throughout the day was comforting and helped me recognize the historicity of the moment. Black and white vintage images of police officers beating young activists in the 1960s suddenly seemed even more antiquated to me as the media and cell phone videographers provided digital color images of Charlottesville community activists and UVA students and faculty challenging the white supremacists. Perhaps the most shocking video shows white supremacist James Alex Fields ramming his Dodge Challenger into a group of counter protestors, killing local activist and paralegal Heather Heyer. The media has often juxtaposed this video with an image of contorted, airborne bodies, captured milliseconds after Fields crashed into the counter protestors. As a historian, I knew the videos and images from Charlottesville would join those from Ferguson, Missouri and Baltimore, Maryland as iconic 21st century images of “the movement” to contest white supremacy.

In the following days, faculty, staff, students, and the broader Charlottesville community tried to make sense of what had happened. Commonly repeated sentiments included, “I can’t believe this happened in Charlottesville,” “Those white supremacists soiled the grounds of our university,” “There is no place for this in our town,” and “White supremacy has been here all along; the powers-that-be just ignored it.” While I fully understand such sentiments, as a historian I felt compelled to consult history and my own research to provide greater comfort and achieve greater understanding.

One of the first things I did was pull W.E.B. Du Bois’s The Souls of Black Folk (1903) from my bookshelf. I immediately went to Chapter 2, “The Dawn of Freedom,” to reread this insight: “the problem of the twentieth century is the problem of the color-line,—the relation of the darker to the lighter races of men in Asia and Africa, in America and the islands of the sea.”2 Du Bois knew, in 1903 and to the end of his life, that race would be a contentious issue in the U.S. not only throughout the twentieth century, but also well into the twenty-first century. As an educator and student of history, The Souls of Black Folk reminds me both of the enduring legacy of racism and white supremacy and of black Americans’ history of perseverance even in the most trying times. 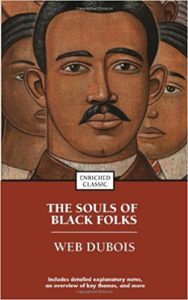 My interview with Rock Hill, SC teacher Janine Thomas also informed my thinking about black Americans’ experience with white supremacy.3 Mrs. Thomas recalled that growing up in Columbia, SC, she felt shielded from Jim Crow most of the time. Nevertheless, she reported, white supremacy was always there, and she remembered forceful reminders of her second-class status when she was sent to sit in the back of the bus. Sixty years after her experience with Jim Crow, Mrs. Thomas continues to feel the pain she suffered under white supremacy. Her story highlights the insidious nature of the kind of world the white supremacists in Charlottesville and elsewhere strive to create—a world people like Mrs. Thomas lived through and fought to overturn. I had to smile when, in our interview, Mrs. Thomas gave an account of being taught by a very nice but stern teacher named Septima Clark, whom she still remembers fondly. Clark inspired her to do well in school and likely helped influence her to become a teacher.

Since the events of August 11 and 12, I also listen periodically to my interview with Mr. James Gaines. A native of Conway, SC, Gaines also recounted life growing up under Jim Crow, observing that white supremacy and Jim Crow were “a normal and everyday way of life for blacks and whites.” Blacks, he noted, did what was necessary to survive during this time. For Gaines, surviving meant focusing on academics and sports, particularly football. His words remind me that in the midst of the battle with white supremacy, life goes on, and that fighting for equality is part of our daily life and struggle.

I will continue to reflect on the events in Charlottesville and the role I can play, as a historian and educator, in the ongoing fight against white supremacy. The wisdom of teachers like Du Bois, Janine Thomas, and James Gaines reminds us that Charlottesville must be understood not as an isolated event, but rather as one battle in the ongoing fight against white supremacy, a struggle that demands our constant vigilance. Each of us has a role to play in this effort, and history can provide insight, serve as a guide, and illuminate our path forward.

1 I was fortunate to later have a conversation with University of Virginia English professor Victor Luftig about the history of white supremacy and anti-Semitism.

3 I have used pseudonyms for the teachers I interviewed.