Back to School: Lessons After #Charlottesville

I greet you at the beginning of a new semester, ecstatic to announce that this past June, after decades of petitioning, the Carter G. Woodson Institute for African American and African Studies finally became a department!  Such was the welcome news of June. That which followed two months later was none so bright,  thanks to the “Unite the Right” rally, and the protests and counter-protests it provoked. The violence, terror, and brutality witnessed over August 11th and 12th, thrust Charlottesville into the headlines globally, leaving us with the unenviable task of reckoning with the fallout and plotting our way forward.  These have not been easy times, not least because what happened to this city cum hashtag has punctured its much vaunted image as one of the nation’s “best places,” winning distinction in multiple categories. Previously, it had been dubbed one of the “15 Best Places to live in the U. S;” one of the “Top 10 Best Places to Retire;” one of the “Top Five Destinations” in the country; and the “Best College Town in America.”  In the shocking aftermath of those two days in August, it became crystal clear that many Charlottesville residents viewed the city in this very light and were thus quick to claim, “This is not us!” “This is not Charlottesville!” These statements quickly became Twitter hashtags of their own. Just as readily others rejoined, “This is not new.” As a Charlottesville native responded to one of the many reporters who flocked to the city for the Alt-Right rally, “Our ancestors been through this before.”

Not surprisingly, as with so many crises our country has witnessed historically, these instantaneous responses were polarized: many residents were quick to claim, “this is not us!” But just as readily, others rejoined, “This is not New!” Such reactions broke, though not neatly, along the perennial fault lines of race and class, of status and location, of privilege and privation. What both sides held in common, however, was the mutual recognition that we must all go back to school; we must all become students again.  Having been “mis-educated,” to riff on The Miseducation of the Negro, written by our namesake, Carter G. Woodson, we must now open ourselves to being re-educated, to becoming first and at least, students of history; for starters, the history of the United States, of Charlottesville, and the broader Commonwealth of Virginia. And for those of us who teach, study, and lead at the University of Virginia, we must first become students of our institution, looking its history squarely in the face. 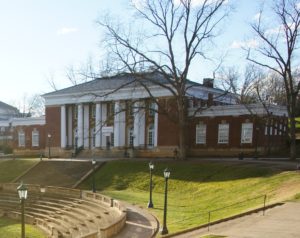 The Carter G. Woodson Institute for African-American and African Studies has engaged in this study since our inception: teaching courses, supporting research, sponsoring lectures and colloquia that establish the deep roots of white supremacy here and abroad.  Now, with newly departmental status, new faculty members, and new research agendas, our unit is uniquely situated to accelerate this study of race and ethnicity, locally and globally, focusing on the myriad—and interlocking—structural inequalities rooted in and sustained by white supremacy. We join our colleagues across the university who are also committed to this study, working collectively to produce the knowledge, as well as to take the actions urgently needed to transform our university here on the eve of its Bicentennial.

This letter features a sampling of responses to the events of August 11th and 12th: Woodson Faculty Affiliate Robert Fatton’s address to the College Fellows, Woodson Pre-Doctoral Fellow Lindsay Jones’ article in Teen Vogue, recent AAS graduate Ayrn Frazier’s piece in the Washington Post, and Woodson alumnus J.T. Roane’s essay on sustaining power of black love. For a full text of this Letter from the Director visit the Woodson Institute’s newly redesigned website! Bear with us as we work out a few kinks.