Patrick Henry: The Trumpet of the Revolution

Patrick Henry “certainly gave the first impulse to the ball of revolution,” Thomas Jefferson told Henry’s first biographer. Henry was “far before all in maintaining the spirit of the Revolution.” Edmund Randolph, an important revolutionary in his own right, explained that “It was Patrick Henry … awakening the genius of his country, and binding a band of patriots together to hurl defiance at the tyranny of so formidable a nation as Great Britain.”  Henry became known in early America as the “Trumpet” of the Revolution (with Jefferson the “Pen” and George Washington the “Sword”).

Yet, today, Henry takes a relatively minor spot in America’s historic memory. Most Americans, perhaps, remember seven words that he spoke: “give me liberty, or give me death,” but Henry played an essential role in our founding. Why, then, do we remember so little about Henry?

This is one of the questions that I wanted to answer in a new short biography, Patrick Henry: Proclaiming a Revolution, and it is a topic that we take up in a new video lecture course, Patrick Henry: Forgotten Founder,  created in a joint venture between UVA’s Lifetime Learning and the Patrick Henry Memorial Foundation.

Henry led opposition to the Stamp Act (getting that “ball of revolution” rolling). He was independent Virginia’s first governor, instrumental in George Rogers Clark’s expedition to the “old Northwest” during the Revolution (arguably critical in that area – today’s Ohio, Indiana, Illinois, Michigan, and Wisconsin – being ceded to the United States in the Paris peace treaty). He was the most popular politician in Virginia in the eighteenth century (with the possible exception of Washington). Henry, the leading anti-federalist, opposed ratification of the Constitution because he believed that it would create a government that was too distant and powerful; his opposition played a very large role in encouraging the adoption of the Bill of Rights. In the 1790s, he was offered positions as a Supreme Court Justice, senator, Secretary of State, ambassador…. Washington begged him to come out of retirement in 1799 to save the nation from the forces of disunion that threatened the still young nation. These contributions seem to justify a much greater role in American history. 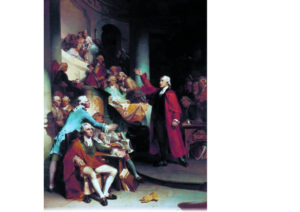 That brings us back to Jefferson. As it turns out, the threat of disunion which caused Washington to implore Henry to come out of retirement was the radical states’ rights agenda of Jefferson and James Madison in the Kentucky and Virginia Resolutions. When Jefferson heard of Henry’s opposition, he declared him an “apostate,” someone who had abandoned the faith; after all, it was Henry, the leading anti-federalist, who was arguably the intellectual father of the “Jeffersonian” Democratic-Republicans, limited government, and states’ rights. Incensed by Henry’s actions (and still stinging deeply from the 1781 investigation of his governorship which Jefferson blamed on Henry), Jefferson would spend the next 27 years actively trying to denigrate Henry’s historic memory. Henry was “avaritious & rotten hearted,” Jefferson told biographers. “He read nothing, and had no books…. He wrote almost nothing; he could not write…. in his heart he preferred low society…” Henry’s legal reasoning was “not worth a copper” (a penny), although Henry was probably the most successful lawyer in Virginia. Jefferson’s vicious attacks were often wildly inaccurate (claiming for example that Washington and Henry despised each other). But Jefferson had to diminish Henry, convince history that he was only a loud speaker (a demagogue). The alternative was to admit that Jefferson’s Kentucky Resolutions which called for states to “nullify” federal action which they believed exceeded the government’s constitutional authority (a term resurrected before the Civil War) perhaps had gone too far – and Jefferson was not prone to backing-down from a political position.

Much more could be said about this story, but it is taken up in detail in the Coursera online course: Patrick Henry: Forgotten Founder.

Before closing, let me make two particularly relevant observations: First, Jefferson’s and Madison’s actions in advocating the radical steps called for in the Kentucky and Virginia Resolutions should be put in context. The Sedition Act had made it criminal to criticize Congress or the president; dozens of newspaper editors were being indicted and jailed – a “reign of witches” Jefferson warned. For Jefferson and Madison, the republic simply could not operate if newspapers were attacked for criticizing the government – a lesson which, unfortunately, we are still repeating today. 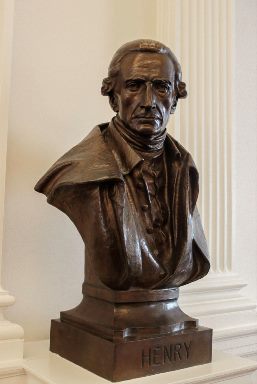 From Henry’s perspective, whatever the faults in the Alien & Sedition Acts, the proper response was not unconstitutional assertion of state power but, rather, going to the ballot box. While Henry had warned that the Constitution would create a government too powerful and distant, in his final speech he urged people to “submit to the constitutional exercise of” power. Henry was embracing the role of a loyal opposition, a role which Henry also adopted after ratification of the Constitution over his objections. He worked diligently to advance his political ideas, “in a constitutional way.” Today, while some love to cite Henry for broad, extra-legal opposition to government power, liberty at all costs, this misunderstands Henry. He understood that liberty in a republic was dependent upon citizens responsibly participating in the process.

It is unfortunate that the “Trumpet” and the “Pen” of the Revolution ended at such loggerheads, but both still have much to teach us.