In honor of National Poetry Month, Lifetime Learning is featuring poems written by esteemed faculty all month long. The fifth poem in this series is written by Debra Nystrom, Professor in the Creative Writing Program in the College of Arts and Sciences at the University of Virginia. She is the author of four poetry collections, the most recent of which is Night Sky Frequencies, New and Selected Poems (Sheep Meadow Press 2016). See below for a full bio. Ms. Nystrom says this about her poem: 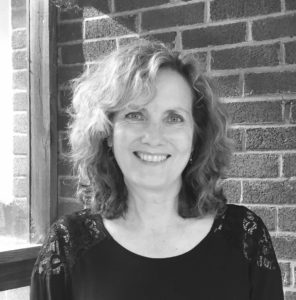 “This poem is set in the place I grew up, in central South Dakota, where grama and sage are native grasses that pronghorn antelope graze on, and you can feel the constant presence of the natural world as a kind of reassurance, despite the vicissitudes of human history– the fact that the land was taken, through abrogation of treaties, from inhabitants who lived on it earlier with more respect than those who own it now.  Though somewhat disguised, the poem unfolds as a sonnet.  As with nature’s recurrences, there’s something we recognize physically about the sonnet shape– a distinct relationship of parts to the whole that appeals to us and affects us unconsciously, providing an unspoken sense of certainty when approaching the mysterious.

“It’s that opportunity for affecting a reader subversively, in the workings of sound and rhythm and syntax, beneath the surface of a poem’s focus on images– that’s what’s powerful about form, and can reminds us of poetry’s ties to ritual and spell and magic, even when a poem’s formal structure is adjusted by partial rhyme replacing whole rhyme, by varied line-length or other alterations that submerge the familiar pattern to a ghostly effect registered only physiologically.  If you drive past a field of sunflowers bending in wind and pull over for a minute to take it all in, you’re not thinking about the mathematical equations at work in what you’re witnessing; you’re absorbed in what’s happening in front of you, around you, inside you.  That pulling you over before you even know why is what a poem hopes to do.”

Shadows appeared earliest in patches of rough, steep
drop below the far east ridge, where the bluffs
fell off first, and antelope
fed together at evening on sage and grama tufts
that took less heat than the fields up top
or the lower bluffs stretching out to the river,
bleached grass bending east in wind, lifting up
sometimes then bending again like the fur
of bigger animals a hand might’ve just passed over.
Their elegant necks angled down as everything sloped
toward the river more than a mile across there,
full of sandbars whose shapes
the water slowly rearranged, so no map
ever stayed exact. 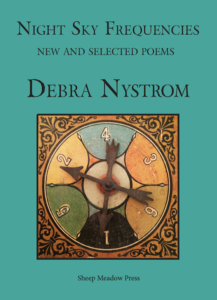 Debra Nystrom is the author of four poetry collections:  A Quarter Turn, Torn Sky, Bad River Road, and most recently Night Sky Frequencies, New and Selected Poems (Sheep Meadow Press, 2016).  Her poetry, fiction and nonfiction have appeared in numerous journals and anthologies, including Best American Poetry, The New Yorker, Slate, Ploughshares, The Kenyon Review, The Virginia Quarterly Review and The American Poetry Review, and have been reprinted on Poetry Daily, The Writer’s Almanac and The Poetry Foundation’s American Life in Poetry.  Nystrom is the recipient of the James Dickey Award from Five Points, The Virginia Quarterly Review’s Balch Poetry Award, the James Boatwright Prize from Shenandoah and The Virginia Prize for Poetry, and she has been awarded fellowships from The Virginia Commission for the Arts and The Virginia Foundation for the Humanities.   She teaches in the MFA Program at The University of Virginia.