Thomas Jefferson: An In-Depth Look at the Man We Have Immortalized: Slavery and our Icons

Mount Vernon, the home of a Virginia president who was not a Jeffersonian, just announced a major initiative to include an exhibit concerning slavery in its museum. The exhibit, scheduled to open in October, will be entitled Lives Bound Together, and will look at the relationship of the enslaved people and plantation owners, including the child of a slave likely fathered by George Washington’s adopted son (Martha’s grandson).

Mount Vernon is understandably concerned about how the exhibit will be viewed: Will it discourage people from coming or draw in those who have felt that Mount Vernon did not include their story? 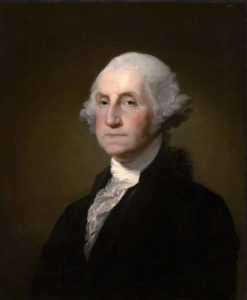 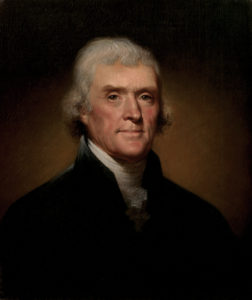 This is a well-worn but still very relevant question at Jefferson’s home, Monticello. Thirty years ago, visitors heard nothing about “slaves,” only “servants.” Now, the question of the role and contributions of enslaved people is taking a prominent place, nowhere more clearly than in Monticello’s Mountaintop Project. The Mountaintop Project hopes to make Monticello appear much more as it did in Jefferson’s time, including the reconstruction of slave quarters and workshops along Mulberry Row just below the house’s east terrace, and bring Monticello and the Thomas Jefferson Foundation into the national dialogue on race.

All of this goes to the root of the question of why we study history and, more particularly, why we feel moved to preserve the homes, belongings, and vistas of American icons. If the iconic image is all that is relevant, no need to include the messy details that might sully the image. Yet, if we hope to see our icons as more than marble statues, as people engaged in the difficult task of forming a nation – and often failing to live up to their own principles but trying to embrace those principles nonetheless – these reminders of the real world in which Washington and Jefferson lived are critical. 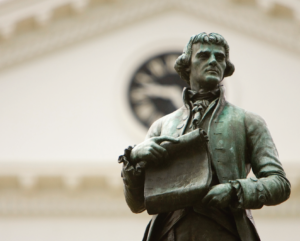 One of the central reasons that so many historic sites are turning their attention in this direction is demographics. As descendants of white Europeans are becoming a smaller and smaller share of the population, fulfilling the promise of an immigrant nation which was built on rights and liberties that speak to all humans “yearning to breathe free,” more and more Americans might well ask what they have to learn at Monticello. Why should they be interested in the history of a white, European slaveowner (who also saw no public/political role for women)?

I am looking forward to hearing Andrew O’Shaughnessy’s thoughts on Thursday evening at the Summer Jefferson Symposium opening dinner: Why the study of Jefferson still remains necessary. Christa Dierksheide will touch on these matters as well Saturday morning in suggesting that, if we hope to understand Jefferson’s internal struggle, we need to take another look at Jefferson and slavery.

Curt Viebranz, president of the Mount Vernon board, recognizes the problem. He introduced the new Lives Bound Together exhibit noting that “There might be some people of my generation who would prefer to leave him on his pedestal.” Viebranz added, though, that “Our challenge as an institution is to make the story of this man topical to the next generation of Americans….”

I think that all of us involved in the Summer Jefferson Symposium believe that Thomas Jefferson is very topical for the next generation of all Americans. Making that so will require us to understand him far better. That is always our goal.

I hope that you will join us at Summer Jefferson Symposium on June 23-26, 2016 as we discuss this and other aspects of our iconic founding father.