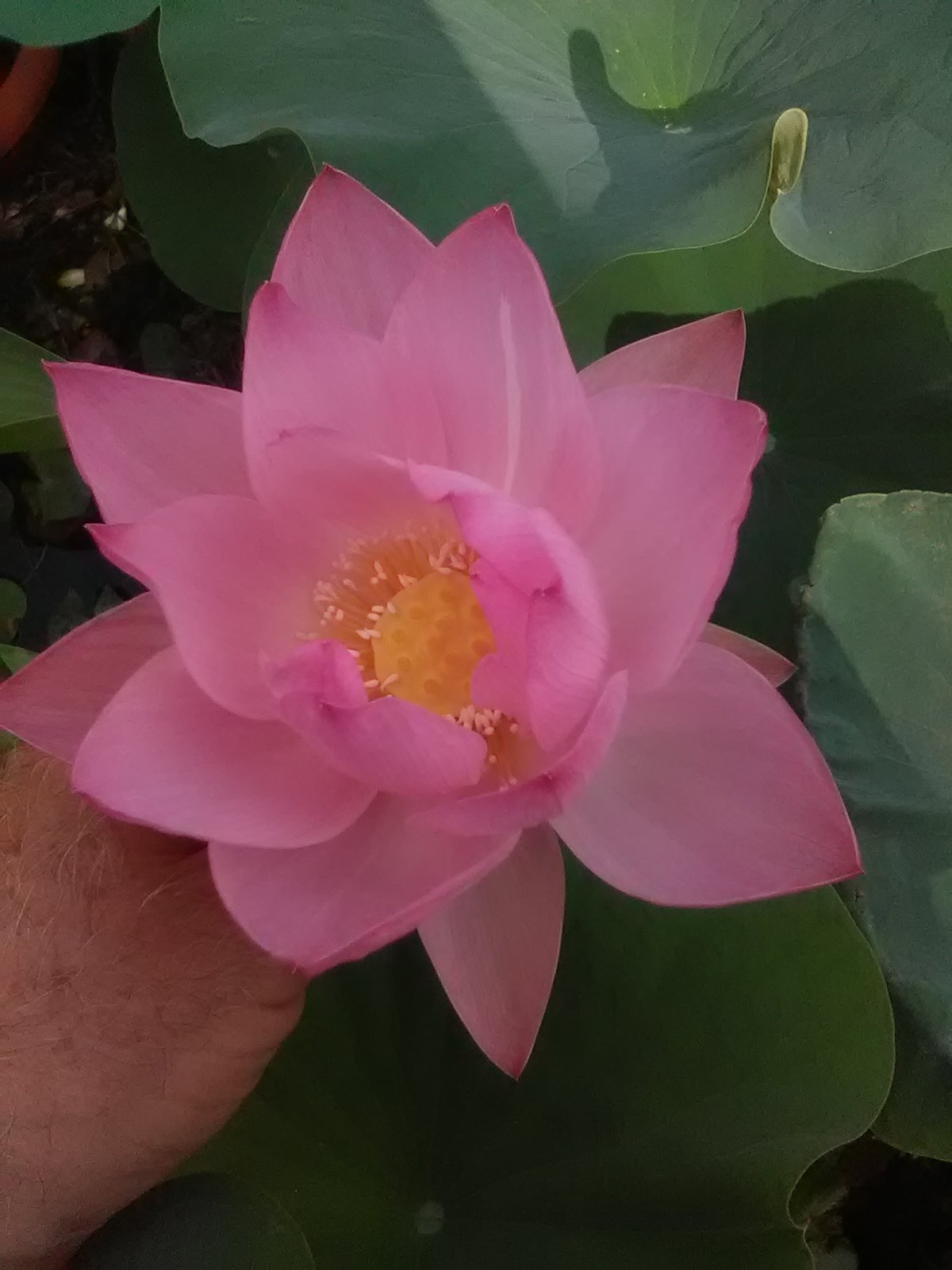 Robert Hueckstedt is a Professor in the DEPARTMENT OF MIDDLE EASTERN & SOUTH ASIAN LANGUAGES & CULTURES at the University of Virginia in the College and Graduate School of Arts & Sciences. Professor Hueckstedt has been teaching Sanskrit since 1983. He came to the University of Virginia in 1998. After a six-year stint as Chair of the Department of Asian and Middle Eastern Languages and Cultures (now two departments: Middle Eastern and South Asian, on the one hand, and East Asian, on the other), he has been working on an edition and translation of a seventh-century prose-poetry text that is a biography of the seventh-century northern Indian king Harshavardhana of Kanauj and Thanesar. The publication is due within the next two years from Harvard University Press's Murty Classical Library of India.

Covid precautions these past two years have opened my eyes to a venue for teaching that seems to be beneficial both for me and my Sanskrit students. Starting in the spring of 2020 it was ZOOM and only ZOOM, and that was adequate but clearly unsatisfactory. Then, starting in the fall of 2021 in-person teaching was mandated but with masks. My teaching is mostly first-year and second-year Sanskrit classes. In addition to learning the writing system that is generally used for Sanskrit, students must learn the pronunciation and rhythm of the language, which cannot be accomplished well from behind a mask, even the odd ones we teachers were given that had clear plastic in front of our mouths. So, what to do?

In the past I always responded negatively to the occasional request from students, usually on a fine spring day, to meet outside. I was certain, and I had learned from experience, that outside held too many distractions, and meeting outside would be counterproductive, no matter how pleasant. The covid precautions, however, only required mask-wearing inside. So, if we were to meet outside all the time, there would be no need to wear a mask, and the distractions would be minimized because they would become nothing unusual, merely quotidian. So, for no particular reason than it is pleasant and relatively near my office, Garden VIII became the “room” for all the SANS courses. 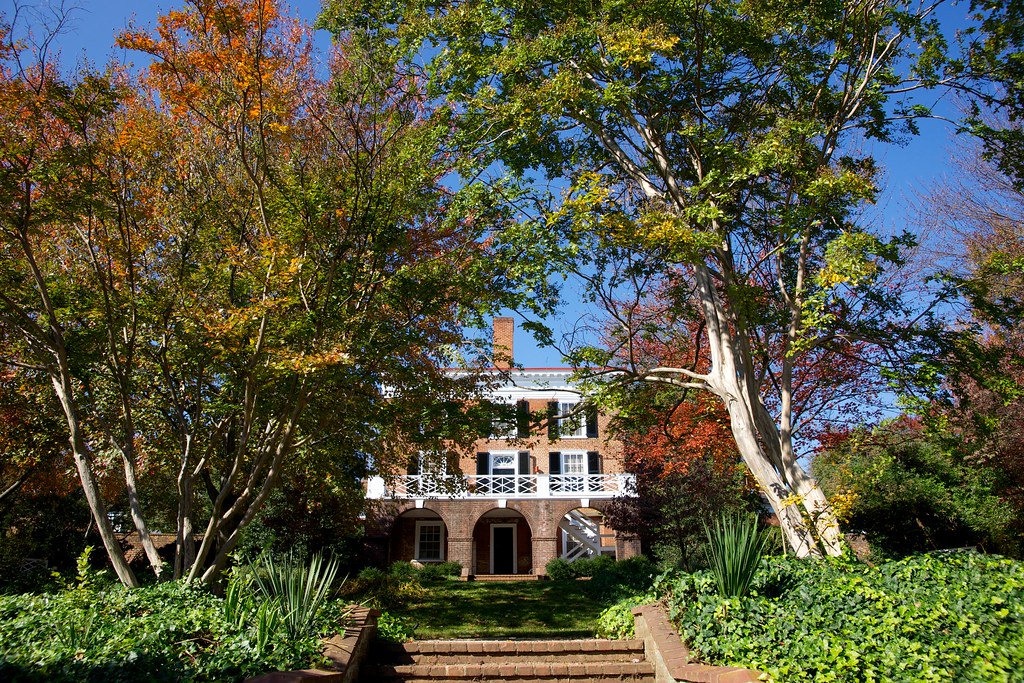 Has it worked? So far, yes. The garden environment has added to the joy of teaching and learning such an important and beautiful language. Furthermore, one could consider it traditional. In ancient India, as far as I am aware, students and teachers met in open-air courtyards or under trees, or perhaps under the roof of a colonnade or verandah, but never in a room with four walls and a ceiling. So why should we? What if it rains or snows? In ancient India, and I think even today, school is not in session during the monsoon season, and the rest of the year, when school is in session, it rarely rains. Here in central Virginia, however, we get a little precipitation all year round, so when that happens, we go inside. What do you and your students sit on? We sit on the grass. I encourage my students to bring something to sit on so they don’t get wet from dew or get stains from the grass or soil, and we all have to make periodic adjustments to our legs, and occasionally class has ended and a student can’t move because her legs have “gone to sleep,” but she didn’t go to sleep. And, there are a couple of short back-less benches in Garden VIII that some have resorted to; being short they are easily moveable. What about a blackboard? Yes, a bit of a problem there. I have a small, portable whiteboard I use, but I admit that, even though it is light, it’s heavy by the time I get it there. A small price to pay, and perhaps it even makes me stronger. 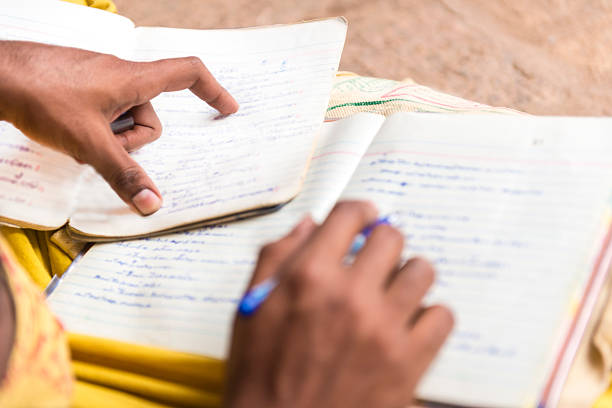 The first year of instruction begins with conversation and learning the writing system. The major difference from writing English is that while English, and in fact all languages using the Latin alphabet, is written with individual letters, Sanskrit is written with syllables. Also, while all modern languages, as far as I am aware, separate words in writing and in print, Sanskrit has rules for when to separate words and when not. Also, sound changes that naturally occur at word boundaries in speech are not usually written when writing the standard form of a modern language. Sanskrit, however, from its earliest period, requires that the sound changes be written. I’m afraid that this may all sound complicated, but it is really no more complicated than writing any other language. English, in some ways, is much more complicated. First of all, English has two forms for every letter: upper case and lower case. Not Sanskrit. English has sometimes more than one sound for a single letter, for example, the letter c of “century” and of “cat.” Sanskrit uses a phonetic system, with only one sound for each basic character.

Can anybody learn Sanskrit? Certainly. One learns it like any other ancient language, divide and conquer, and always keep putting it back together. If you are able to read these words, you’ll be able to learn Sanskrit. It’s simply a matter of devoting the time to it, and studying a little bit every day is much preferable to studying only once a week. So, if you’re in the vicinity of Garden VIII, drop by. This semester, students enrolled in the first class meet MWF at 9 a.m., and students enrolled in the second class meet at 11 a.m., reading the Bhagavad Gita. 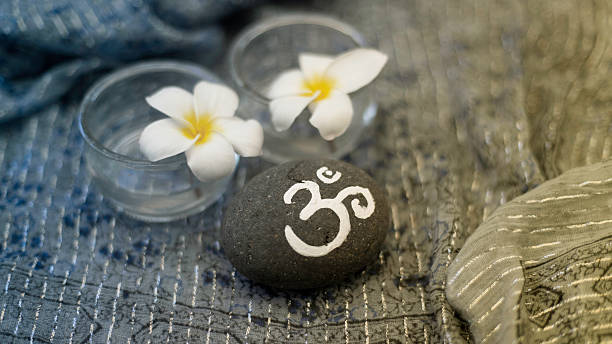