Trees on The Lawn

TREES ON THE LAWN

The trees on the Lawn at the University of Virginia have a long history, although exactly when the first trees were planted remains unclear. While some early engravings show an idealized Lawn, flanked with Pavilions and Colonnades, without trees, surely these artistic interpretations were done to feature the buildings clearly, and not obscure them with tree canopies. (There may be some architects out there who wish for that condition today!) 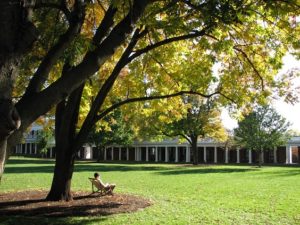 Instead, trees have contributed to the quality of the Lawn’s landscape over the years by providing shade, structure, color, and habitat. Who can imagine the Lawn without the stately canopy of the ash trees, the spring song of robins perched above, the red and yellow highlights of the maples in the fall? The trees on the Lawn also provide a dynamic foil to the sublime, but relatively static, composition of the architecture, as they grow from youth to maturity and decline. The size and shape of the tree canopies on the Lawn are always changing and always different from one another while the architecture remains largely the same. (I say “largely” because the architecture does change, as, year by year, UVA restores the structures to return them more accurately to their original Jeffersonian designs.)

An early Jefferson sketch, contained in a letter to William Thornton while the design concept for the Academical Village was still in development, contains the famous “grass & trees” note, which suggests his vision for the Lawn was one composed of those forms of vegetation.

Numerous references suggest that the first trees planted on the Lawn were black locust, Robinia pseudoacacia, an interesting selection given their rather scruffy habit, although they do have the redeeming feature of large white panicles of fragrant flowers. During the William Pratt period, 1858-1865, maple and ash trees began to be planted on the Lawn, replacing the black locust. In fact, a couple of the largest ash trees may date to this period. The double row of trees on each edge of the Lawn may also have developed during this period.

Rather than replanting in the exact spot where a tree was lost, in the late 1990’s the University developed a long-term tree planting plan for the Lawn. Some trees had been planted across the faces of the Pavilions, obscuring their views. This plan rationalized tree spacing in a double, staggered row at specific distances from the buildings’ faces, and planned for trees to flank, not run in front of, the Pavilions. The plan consisted of all native ash trees and was revised some years later to incorporate red and sugar maple cultivars at specific locations where their fall color would enhance views of the Lawn and Rotunda.

The ash trees have a perfect shape for the Lawn–they are high canopied and vase shaped–so their limbs tend to stretch up and over, and not into, the adjacent architecture. So ash trees have served as the predominant tree on the Lawn, with the maples used for accent. (Maples tend to be surface rooted, which means grass is challenging to grow beneath them.) Unfortunately, the spread of emerald ash borer from the Midwest to Virginia has forced a rethinking of the use of ash trees. While they are protected by a very effective injection of emamectin benzoate every two years, ash trees simply will not be available commercially due to this invasive pest. So the University is testing several other large-growing, native shade trees on the lower Lawn at Homer flat: American linden, an American elm cultivar, “Valley Forge,” and tulip poplar. Perhaps relying so heavily on one species is no longer a prudent approach, given the number of pests and diseases that continue to be introduced into this country.

A number of the trees on the Lawn are Founder’s Day trees. Each year, the Arboretum and Landscape Committee puts forth the name of an individual who has contributed significantly to the University’s Grounds to be honored by the ceremonial planting of a tree on Founder’s Day. This fine tradition started in 1970. The location and species of these trees, as well as those honored, can be found on the Commemorative Tree website. A handful of officially designated trees predated the Founder’s Day tradition. None is more impressive than the Pratt ginkgo, honoring William Pratt, the University’s first superintendent of Buildings and Grounds. It is thought to have been planted in 1860, and certainly its magnificent size hints of its age. It is one of the last trees to show fall color and is the most brilliant bright yellow. Its leaves often fall quickly, leaving a pool of yellow around its massive base. And fortunately, it is a male tree, so it does not produce those round fruits that have a pungent smell when stepped upon!