Thomas Jefferson: A Founder Worth Remembering?

What should we think about Thomas Jefferson? John Ragosta will discuss Jefferson’s contributions and contradictions at UVA’s Founder’s Day celebration on Friday, April 12 in Old Cabell Hall at 1:00 pm. Mr. Ragosta holds his PhD and JD from the University of Virginia where he is the faculty leader of Lifetime Learning’s Summer Jefferson Symposium. He teaches the popular Coursera MOOC, “Patrick Henry: Forgotten Founder,” and is a historian at the Robert H. Smith International Center for Jefferson Studies at Monticello.

Thomas Jefferson was racist and sexist; he promoted a radical states’ rights philosophy which was relied upon by southern secessionists and was a rallying cry for Confederates before, during, and after the Civil War. His call for “blood for the tree of liberty” has been a favorite of homicidal extremists. British politician and historian Conor Cruise O’Brien labels him a “radical and racist” who should be removed from the Pantheon of American heroes. 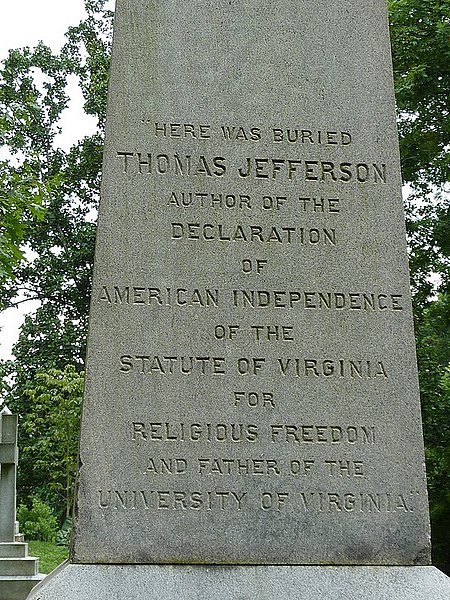 But then there is his Declaration of Independence – America’s mission statement, what Abraham Lincoln called “a stumbling-block to the very harbingers of reappearing tyranny and oppression.” The Virginia Statute for Religious Freedom – America’s creed, a call for religious freedom and separation of church and state which, like the Declaration, encouraged a worldwide revolution for freedom. The University of Virginia and its dedication to pursuing truth “wherever it may lead,” not afraid “to tolerate any error so long as reason is left free to combat it.” And Jefferson led an even more fundamental revolution which empowered the common man to participate effectively in government, defying leaders across the globe who still believed that the well-born and wealthy should command – “booted and spurred, ready to ride” on the back of the mass of mankind. True, Jefferson intended the broad-based polity to be white men, but women and people of color have used Jefferson’s vision for their own empowerment.

What, then, to do about Jefferson?

Certainly we cannot ignore his deep flaws. That was done for far too long, and it was both ahistorical and unjust. At the same time, ignoring his accomplishments is equally ahistorical and would deprive the nation of important lessons which we still have to learn about our founding and the nature of a democratic republic. It is also worth remembering that removing Jefferson from our “Pantheon or heroes” would come at great cost; after all, several Supreme Court justices and conservative academics have sought to erase Jefferson’s contributions to religious freedom so that they can remove, or overstep, the wall of separation between church and state.

Ultimately, the burden of Jefferson is upon us: We must be able and willing to engage both his successes and his failings at the same time. We cannot celebrate the former while whitewashing the latter. No more can we fixate entirely on the latter while ignoring the former.

This tension in our understanding of Jefferson is certainly on display for UVA’s Founder’s Day. Our university shares in his contradictions and complexities.

As the UVA President’s Commission on Slavery pointed out, in founding the University, Jefferson hoped, in part, to remove young southern gentlemen from the influence of Northern abolitionists. He hoped, as well, that their education would occur in an environment in which slavery would be invisible or, at least, masked. The reality was an institution literally built and maintained by enslaved people.

Yet, Jefferson’s dedication to a broad public education and plans for a university pre-dated the founding of the University of Virginia by forty years. Jefferson saw a broad public education as a foundation for a republic; only educated citizens would have the ability to make the wise and reasoned choices needed to preserve democracy. His 1779 Bill for the General Diffusion of Knowledge sought to provide public education for all free children (girls and boys, apparently black and white); it sought to send the most accomplished boys on for higher education, even a free education at a public university. Had it been implemented, Virginia would likely have had the most advanced public educational system in the world. By the time that UVA was actually founded, he unfortunately insisted that only the rising generation could address the issue of slavery, but he continued to hope that enlightened progress through education might produce that result while yielding untold benefits for the people, the nation, and the world.

What to do with Thomas Jefferson?