Herbert “Tico” Braun, an associate professor in the Corcoran Department of History, teaches an Engagements course on the individual and society in the College and Graduate School of Arts & Sciences’ New Curriculum at the University of Virginia. In Fall 2019 he will serve as the director of Valencia First, UVA’s new study abroad immersion program for entering first-year students.

Mr. Braun provides thoughtful commentary about today’s University students. We invite you to add to the conversation (below).

A new semester is here. It’s exciting. I am getting to know my new students.

I am writing about my students now, because over a year ago the alt-right demonstrators came with violence and hatred to Charlottesville, to our town. I tell my students to write things down. Now I am doing so too.

I like my students because of who they are. I like them as persons, as individuals. They are at the center of our culture wars.

So many people out there across the land think that they do not like my students. People are scowling at them. There is something wrong with those young people, they say. What is to come of this nation, they ask, rhetorically, when the coddled, snowflake generation takes over the reins of power, when it rules over the corporate world. They lack character. Grit. When they become adults America will not be strong, they say. America will not be great, no longer the most powerful country in the world.

But I like my students. About 10 or so years ago (I have been teaching here for 35), my students did not know about inequality in America. Now they do. It’s not that they are smarter or more perceptive then students before them. It’s that America has changed.

We all know about inequality today. My students don’t like it. It makes them feel uncomfortable. Some of them now suddenly talk about privilege, their own. Class. Money. Background. They are not going to give their privileges away, if they knew how to, but they are uneasy knowing that they have more than others do. It shouldn’t be like this, they say. It’s not fair. They volunteer for hours through Madison House, to help others who have been left behind here in our community.

Many white students recognize their white privilege. They question themselves. They question their society, and they do so here, in what was once Mr. Jefferson’s university, and still is. Our students now are little like the founder then. As they look up to him, they also question him. My students are instinctually, culturally, living egalitarians.

It’s not mainly that my students are liberals and that those out there across the land who insult them are conservatives. It’s not really a culture war of ideologies, of left against right. It’s deeper than that. My students don’t really have ideologies. Some roughly refer to themselves as liberals, libertarians, or conservatives, of one political party or the other, or of neither.

The culture wars are cultural, about ways of living, of relating to one another. They are about how we are going to treat one another across our various social divides. 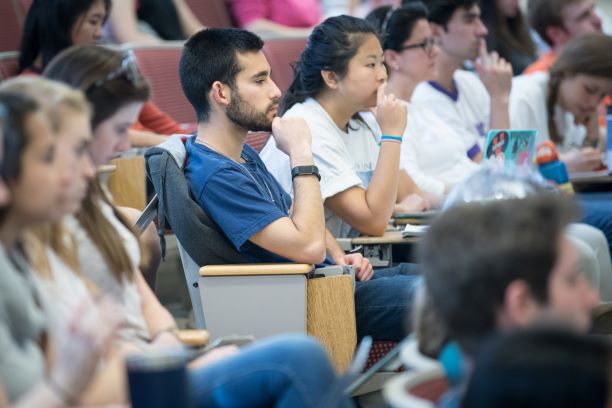 As I watch my students across Grounds, I sense how comfortable they are with one another. Even racial differences seem to bring them together, as though naturally.

My students want to understand the differences among them, to accept one another, to make the divides of race, class and gender ever more porous, to draw nearer to others. It is not that my students are special. They are like students, like young people all across the country.

I am sure that not a single one of my students ever considered even the possibility of joining the alt-right demonstrators on Aug. 12 here in Charlottesville. Neither would nearly any of you, the graduates of the University of Virginia.

I know that all across the land you do not look down on my students. I know that. But some days I have to keep reminding myself of that. Like you, I like my students. I really do. They want to make America a better nation.