Summer Jefferson Symposium, hosted by Lifetime Learning in UVA‘s Office of Engagement from June 21-24, was an opportunity for alumni, parents and friends to share in deep conversation about a brilliant and complicated man. John Ragosta, Summer Jefferson Symposium Faculty Leader, historian at the Robert H. Smith International Center for Jefferson Studies at Monticello and fellow for Virginia Humanities offers us final thoughts on Thomas Jefferson’s last legacies.

After months of preparations, countless planning meetings, and scores of hours spent in front of the computer and in the library arranging remarks, the Summer Jefferson Symposium always seems to pass in a flash. Last week, in a few days that were a blur of activity, we enjoyed marvelous venues and food, several enthralling tours, and a schedule of stimulating lectures by a remarkable group of scholars on fascinating, important, and difficult topics.

I hope that our participants, too, look back and wonder where the time went, and how we packed so much into an all-too-brief weekend in Charlottesville.

One suspects that Jefferson also found his time at Monticello and UVA always all too brief.

And yet, his time here in Charlottesville – after the Revolution, after France, after the battles with Hamilton, after the presidency – was strikingly memorable, for him and for us. 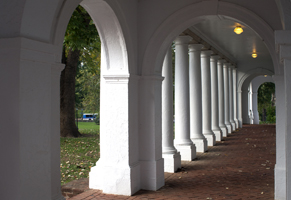 While I have read much of UVA’s history, I was surprised this weekend by what Andrew O’Shaughnessy showed were the plethora of ways in which Jefferson’s UVA created new educational opportunities and set a foundation for American education even in our times, from elective courses, to economics, to a rigorous medical education for doctors. Even the unique architecture for his beautiful “academical village,” Louis Nelson explained, was an opportunity to instruct students in the classics. At Monticello, our guide opened-up a home which was a place of learning, rest, retreat, engagement, and contemplation.

Of course, Jefferson faced myriad problems in retirement as he built UVA and Monticello, the physical challenges being the least of his worries. At UVA, he sought to protect the students from the pressures of an “official” religion – his battle against “tyranny over the mind of man” in order to protect the “illimitable freedom of the human mind” – and he even hoped to insulate the students from the corrupting influence of slavery. This was not just an exercise in philosophy for Jefferson, but he saw for UVA, and in education more generally, a critical role in the still new nation – educated, engaged citizens were absolutely essential to the republic. Some of his plans never came to fruition, some faced pressure and challenges after his death, but the problems cannot obscure the successes evident in the fact that thousands of new students come to Mr. Jefferson’s university each year to learn, that half a million visit his little mountain to understand, and that we still gather, two hundred years later, to study the man who some say “invented” America and wrote both our mission statement and creed. One suspects that he was looking beyond all of those problems when he wrote that “I like the dreams of the future better than the history of the past.”

Thinking back on our time together last week I am struck with three thoughts:

First, while I had been mulling the communities that Jefferson built at Monticello and UVA, the Summer Jefferson Symposium is itself a remarkable community, especially with so many of our participants joining us again and again. We really need to internalize how essential such engagement in a community is to deep learning. Over his lifetime, Jefferson created several reading lists for those interested in study, but such reading was fundamentally different from gathering together to learn. Such gathering, at UVA and at other schools, is central to the very notion of liberal arts education. Today, we have a profusion of print and digital resources, online courses, lecture series, and even excellent television programming, but none of these are a substitute for an educational community. While I enjoyed the opportunity to create a Massive Open Online Course concerning Patrick Henry in cooperation with Lifetime Learning, that is not a substitute for a community of education, and I am so pleased that one of the most important aspects of the Symposium occurs as people think and discuss and argue about the complicated topics in questions after lectures, at dinner, and as we walk the Grounds, importantly, engagement across several generations. 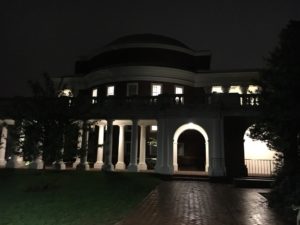 Second, Jefferson is never a simple character to study and presents us with a seemingly endless set of complexities. Undoubtedly he had failings, serious failings, and I join in the view increasingly evident at Monticello, UVA, and other places that we need to openly discuss and recognize those failings. The great risk of making Jefferson irrelevant lies in seeking to whitewash real issues that everyone knows exist.

Yet, even with all of those issues, even with our recognition and deep concern over serious failings, we are left with Jefferson and his vision. There is no denying that Jefferson so often speaks for America. Merrill Petersen once wrote that Jefferson expressed what the “American people really felt and wanted.” Peter Onuf expressed a similar thought in explaining that Americans “think they know Jefferson because Jefferson – in visionary moments – seems to know them.” 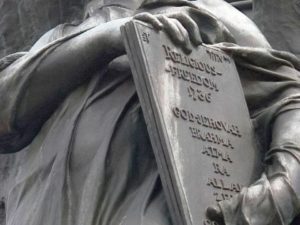 I prefer a slightly different formulation: Jefferson’s vision – in the Declaration, in the Virginia Statute for Religious Freedom, in founding UVA – expresses what we really want to feel about ourselves and our nation.

That is not a bad thing. As Americans we are, in a very real sense, Jefferson’s legacy.