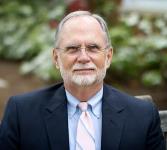 On August 22, 2018, the Lifetime Learning program in the Office of Engagement will host a One-Day UVA program–Strategize Environmental Issues: The UVA Bay Game–at the VCU Rice Rivers Center in Richmond.

In late 2008, the then Vice President for Research, Tom Skalak, led a group of faculty members in coming up with a way to raise UVA students’ awareness of issues surrounding environmental change. The faculty group discussed a variety of approaches. Eventually, Skalak proposed building a “serious” computer-based simulation/game. He suggested that the game be based on the environmental challenges facing the Chesapeake Bay Watershed–in particular, the nitrogen and phosphorous loads that were flowing into the Bay from a variety of sources. These nutrients were the principal cause of the degradation of the Bay and threatened its iconic blue crab population.

A faculty design team took up the challenge of building a prototype “UVA Bay Game.” Faculty members from seven schools participated in the design – CLAS, SEAS, Architecture, McIntire, Darden, Law, and Medicine. Among the design goals were that the Game players represent a number of different contributing and affected sectors – agriculture (crops and livestock), land development, watermen, and various state level regulators for each.

Players took on these roles in the seven major river sheds that flow into the Bay—the James, Rappahannock, and York in Virginia; the Patuxent, Potomac, and entire Eastern Shore in Maryland; and the Susquehanna in Pennsylvania. Of course, we took some geographic liberties with these river sheds. In each one, we added Crop Farmers, Animal Farmers, Land Developers, and Watermen (none in Pennsylvania). We then included state-level (VA, MD, PA) regulators to allocate taxes and incentives to “encourage” good choices of action in each role and river shed. In all, the Game can accommodate up to 166 live player roles with multiple players in each river shed. Gameplays can have as few as 16 players using only two river sheds; any roles not played by a live player are simply simulated.

Beginning in December 2008 and with a flurry of development activity, the original Bay Game was launched on Earth Day, April 22, 2009. The development team consisted of UVA faculty members, a team of four Systems Engineering graduate students, and an outside developer with experience in environmental modeling. The launch event had about 120 UVA students participate. To be honest, it had a few bumps, but pulling all-nighters, a successful experience was had by all.

The faculty development team thought that the UVA Bay Game would be used only few more times within classes at the various schools. Now, nearly ten years on, the UVA Bay has been used over 200 times, literally around the world! We’ve taken the Game to Canada, Brazil, Hong Kong, Australia, and the Baltic Sea. A number of government agencies have used it – NOAA, EPA, and even the U.S. House of Representatives (the Chesapeake Bay Caucus). Among the businesses that have used the Game are GE (three times), IBM, Goldman Sachs, Coca Cola, John Deere, and Bloomberg. A Gameplay was held at the South by Southwest (SxSW) Eco conference with the assistance of Phillipe Cousteau, grandson of Jacques Yves Cousteau. The Game has been played in numerous high schools and even a fifth-grade science class. The UVA Bay Game was updated a few years ago and remains publicly available to anyone that would like to use it, for free.

A by-product of UVA Bay Game is that it has led to other serious game development including a Global Sustainable Supply Chain Game for LAUNCH (U.S. State Department, USAID, NASA, and Nike); a Louisiana Coastal Resilience Game (ConocoPhillips and Entergy); and a Pearl River Delta Air Quality Game (with the Hong Kong University of Science and Technology).

The UVA Bay Game project provides clear evidence that a large, research university is uniquely equipped to tackle difficult societal challenges by combining the expertise of a group of scholars and researchers working collaboratively. Interestingly, the core faculty development team continued to meet every Monday morning at 8:00am for about four years to discuss improving and extending the game. In speaking with colleagues from other universities, while they were interested in the Bay Game itself, they marveled at how we got so many faculty members to meet regularly at such an early hour week after week! Our answer was that we found interdisciplinary work challenging and exciting, and most of all, we actually enjoyed each other’s company and our often wide-ranging discussions.

JOIN US on August 22nd at the VCU Rice Rivers Center–there are a few seats remaining!